“Discerning God’s Will” by R.C. Sproul 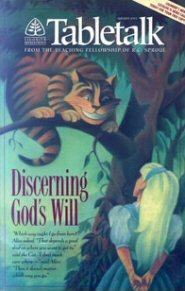 How easily these words fall from the lips or flow from the pen. How difficult it is to penetrate exactly what they mean. Few concepts in theology generate more confusion than the will of God.

One problem we face is rooted in the multifaceted way in which the term “will” functions in biblical expressions. The Bible uses the expression “will of God” in various ways. We encounter two different Greek words in the New Testament (boulē and thēlema), both of which are capable of several nuances. They encompass such ideas as the counsel of God, the plan of God, the decrees of God, the disposition or attitude of God, as well as other nuances. Further distinctions in historical theology add to the labyrinth of meanings attached to the simple formula “the will of God.”

Augustine once remarked, “In some sense, God wills everything that happens.” The immediate question raised by this comment is, In what sense? How does God “will” the presence of evil and suffering? Is He the immediate cause of evil? Does He do evil? God forbid. Yet evil is a part of His creation. If He is sovereign over the whole of His creation, we must face the conundrum, How is evil related to the divine will?

(1) The Decretive Will of God

This is sometimes described as the sovereign efficacious will, by which God brings to pass whatever He pleases by His divine decree. An example of this may be seen in God’s work of creation. When God said, “Let there be light,” He issued a divine imperative. He exercised His sovereign efficacious will. It was impossible for the light not to appear. It appeared by the sheer necessity of consequence. That is, the decretive will can have no other effect, no other consequence than what God sovereignly commands. He did not request the light to shine. Nor did He coax, cajole, or woo it into existence. It was a matter of the authority and power vainly sought by the king of Siam when he said to Anna (to no avail), “So let it be said; so let it be done.” No creature enjoys this power of will. No man’s will is that efficacious. Men issue decrees and then hope they will bring about their desired effects. God alone can decree with the necessity of consequence.

(2) The Preceptive Will of God

The preceptive will of God relates to the revealed commandments of God’s published law. When God commands us not to steal, this “decree” does not carry with it the immediate necessity of consequence. Where it was not possible for the light to refuse to shine in creation, it is possible for us to refuse to obey this command. In a word, we steal.

We must be careful not to make too much of this distinction. We must not be lulled into thinking that the preceptive will of God is divorced from His decretive will. It is not as though the preceptive will has no effect or no necessity of consequence. We may have the power to disobey the precept. We do not have the power to disobey it with impunity. Nor can we annul it by our disregard. His law remains intact whether we obey it or disobey it. Even this law cannot ultimately be frustrated. There will come a time when no one will steal. The sinner in hell will be forcibly restrained from stealing. The saint in heaven, in the glorified state of perfected sanctification, will be totally disinclined to theft.

In one sense the preceptive will is part of the decretive will. God sovereignly and efficaciously decrees that His law be established. It is established and nothing can disestablish it. His law exists as surely as the light by which we read it.

A common way to resolve this conundrum is by appeal to a distinction between the sovereign will of God and His permissive will.

(3) The Permissive Will of God

The distinction between the sovereign will of God and the permissive will of God is fraught with peril, and it tends to generate untold confusion.

What is usually meant by divine permission is that God simply lets it happen. That is, He does not directly intervene to prevent its happening. Here is where grave danger lurks. Some theologies view this drama as if God were impotent to do anything about human sin. This view makes man sovereign, not God. God is reduced to the roll of spectator or cheerleader, by which God’s exercise in providence is that of a helpless Father who having done all He can do, must now sit back and simply hope for the best. He permits what He cannot help but permit because He has no sovereign power over it. This ghastly view is not merely a defective view of theism; it is unvarnished atheism.

Obviously the motive behind this specious theology is virtuous. It is fueled by a desire to exonerate God from any culpability for the presence of evil in the world. I am sure God is pleased by the sentiment but repulsed by a theory that would strip Him of His very deity. Calvin said of this:

“Hence the distinction was devised between doing and permitting because to many this difficulty seemed inexplicable, that Satan and all the impious are so under God’s hand and power that He directs their malice to whatever end seems good to Him, and uses their wicked deeds to carry out His judgments. And perhaps the moderation of those whom the appearance of absurdity alarms would be excusable, except that they wrongly try to clear God’s justice of every sinister mark by upholding a falsehood” (Institutes I.xviii.1).

Calvin locates the scurrilous untruth in the faulty distinction between willing and permitting:

“It seems absurd to them for man, who will soon be punished for his blindness, to be blinded by God’s will and command. Therefore they escape by the shift that this is done only with God’s permission, not also by His will; but He, openly declaring that He is the doer, repudiates that evasion. However, that men can accomplish nothing … except what He has already decreed with Himself and determines by His secret direction, is proved by innumerable and clear testimonies” (Ibid.).

Calvin goes on to enumerate several passages that support his thesis, looking to Job, Satan and the Sabeans, the role of Pilate and Judas in the execution of Christ, the role of Absalom in Jewish history, etc.

The key phrase is this: “Therefore they escape by the shift that this is done only with God’s permission, not also by His will.”

Here the operative word is only. If we are in any just way to speak of God’s permissive will, we must be careful to notice not only the word permissive but also the word will. Whatever God “permits” He sovereignly and efficaciously wills to permit. If I have a choice to sin or not sin, God also has a choice in the matter. He always has the ability and the authority to stop me from exercising my will. He has absolute power to restrain me. He can vaporize me instantly if it is His pleasure. Or He can keep me on a long leash and let me do my worst. He will only permit me to do my worst if my worst coincides with His perfect providential plan.

In the treachery perpetrated by Joseph’s brothers, it was said, “You meant it for evil; God meant it for good.” God’s good will was served through the bad will of Joseph’s brothers. This does not mean that since they were only doing the will of God the acts of the brothers were virtues in disguise. Their acts are judged together with their intentions, and they were rightly judged by God to be evil. That God brings good out of evil only underscores the power and the excellence of His sovereign decretive will.

We sometimes get at this same problem by distinguishing between God’s active will and His passive will. Again we face difficulties. When God is “passive,” He is, in a sense, actively passive. I do not mean to speak nonsense but merely to show that God is never totally passive. When He seems to be passive, He is actively choosing not to intercede directly.

Augustine addressed the problem this way: “Man sometimes with a good will wishes something which God does not will, as when a good son wishes his father to live, while God wishes him to die. Again it may happen that man with a bad will wishes what God wills righteously, as when a bad son wishes his father to die, and God also wills it.… For the things which God rightly wills, He accomplishes by the evil wills of bad men.”

About the Author: Dr. R.C. Sproul is the founder and chairman of Ligonier Ministries, an international Christian education ministry located near Orlando, Florida. His teaching can be heard on the program Renewing Your Mind, which is broadcast on hundreds of radio outlets in the United States and in 40 countries worldwide. He is the executive editor of Tabletalk magazine and general editor of The Reformation Study Bible, and the author of more than seventy books (including some of my all time favorites: The Work of Christ; The Holiness of God; Chosen By God; Reason to Believe; Knowing Scripture; Willing to Believe; The Intimate Marriage; Pleasing God; If There’s A God, Why Are There Atheists?, and Defending The Faith) and scores of articles for national evangelical publications. Dr. Sproul also serves as president of Ligonier Academy of Biblical and Theological Studies and Reformation Bible College. He currently serves as Senior Minister of preaching and teaching at Saint Andrew’s in Sanford, FL. The article above was adapted from Ligonier Ministries Tabletalk magazine – August, 1993.