5 Marks of Maturity in Christian Leaders

This is a good place to think about maturity, because one of the goals of Christian leadership is to help others reach their full potential for service. We want to be at our best and we want those working with us to be at their best so that we can do our best work together and, if it’s God’s will, go on to greater challenges. This doesn’t mean that we “break” other people and “re-make” them in our own image, because we aren’t God, and our image—even our best image—doesn’t fit everybody. Instead, it means helping people to grow up and do their very best so they can move ahead in service. Maturing people know themselves, accept themselves, and are themselves in every situation. They don’t “play roles.” They are realistic about themselves and have no illusions about who they are or what they can do. They aren’t fooling themselves or trying to fool others, because maturity and humility go together.

David wrote about this in Psalm 139. No matter how inept we may be in some things, each of us is still “fearfully and wonderfully made,” and we should all praise God for what we are and what we can do (Ps. 139:14). When God made us, He made no mistakes. When I was in grade school, it didn’t take me long to discover that I was not an athlete. (My two older brothers were accomplished athletes.) When you are the last one chosen for every team, and the team that ends up with you tries to give you to another team, you eventually get the message. I could run fast, so soccer was the only game I excelled in; but soccer wasn’t an official school sport in those days. In Indiana, where I grew up, basketball and football reigned supreme. So what did I do? For protection, I managed to have either a star football player or star basketball player as a locker partner, and I managed to bungle my way on the field or in the gym, staying out of trouble. My teammates approved; after all, they did want to win the game. But when it came to academics, writing for the school paper, making speeches for the student government, and even serving as a substitute when a teacher was absent, I was in my element. In those days schools awarded letters only for athletics, not academics, but I didn’t mind. The entire experience helped me find myself and discover the work God wanted me to do.

What are some of the marks of people who are maturing?

To begin with, because they know themselves and accept themselves, they learn to accept others and cultivate a team approach to getting things done. It makes no difference who scores the points so long as the team wins. The key word is “cooperation” and not “competition.” I think it was the British naval hero Lord Nelson who came on deck and found two of his officers engaged in a violent argument. He watched them a few moments and then stepped between them. Pointing to the ocean, he said, “Gentlemen, there is but one enemy, and he is out there!” Whether it’s a coach giving a halftime pep talk or the president of a company explaining a new policy, the goal is the same: different people with different personalities working together to achieve the same purposes with the least possible amount of friction.

Maturing people speak the truth in love (Eph. 4:15). It has well been said that truth without love is brutality and love without truth is hypocrisy. Brutality and hypocrisy are both sins, and sin destroys. Truth and love are tools to build with, and they are partners that work together. It would benefit us to read 1 Corinthians 13 frequently and ask ourselves, “Is this my portrait?” Love is named first in the list of the fruit of the Spirit (Gal. 5:22–23) because love helps us produce and share the rest of the fruit that Paul names. Jesus called love a “new command” and said it is the major mark of each of His disciples (John 13:34–35).

Mature people know how to take responsibility willingly. When problems arise, they admit mistakes and ask questions instead of inventing excuses. They can be trusted to do their work well whether or not anybody is watching. I was once on a staff with a man whose evasive nonwork habits were obvious to everyone but himself. When asked to report on an assignment, he would invariably reply, “Oh, that’s in my briefcase!” When asked where his briefcase was, he would say, “It’s in the trunk of my car.” Where was his car? His wife had it! He didn’t stay on staff very long.

Mature people know that the way they do their work affects how others do their work. Mature people do more than is required, not to earn points or get special recognition but because they consider themselves “slaves of Christ, doing the will of God from [their] heart” (Eph. 6:6). If they see a fellow worker having trouble, they offer to help. They don’t compete with others; they compete with themselves and always strive to do their work better. Mature people have a healthy outlook on life and are dependable whether the Lord sends defeats or victories. If others have a gift of complaining, mature workers don’t preach at them but rather try to have a positive attitude that may help to transform pessimism into optimism. Like Paul and Silas in prison, mature workers can sing and pray—and bring down the house (Acts 16)!

As I’ve watched the men and women who have modeled leadership to me, I’ve observed that they not only have faith in God but also demonstrate faith in their co-workers. All of us on the team must believe in each other, or teamwork will be impossible. We must pray for one another and trust God to work in us, among us, and through us. “I hope in the Lord Jesus to send Timothy to you soon,” Paul wrote to the Corinthian church that Apollos was “quite unwilling” to visit them at that time but would come when he had opportunity (1 Cor. 16:12). This shows that Paul didn’t “play God” in the lives of his associates, moving them around against their wills. Paul had his plans, but so did the Lord—and Paul was flexible.

When a new member joins the team, we soon calculate their “maturity quotient,” and we might have to switch to Plan B to help them start growing. How do they respond to criticism and to praise? Are they patient with delays? Do they know which port they are headed for? Can they patiently listen without interrupting? Even seasoned servants occasionally become childish and require private therapy. “Wounds from a friend can be trusted, but an enemy multiplies kisses” (Prov. 27:6). When I reflect on my own years of service, I give thanks for the men and women who patiently helped me mature and become a better team player. I’m still learning. 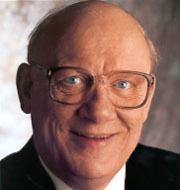 Warren W. Wiersbe is the Distinguished Professor of Preaching at Grand Rapids Baptist Seminary, and is the author of more than 100 books. Billy Graham calls him “one of the greatest Bible expositors of our generation.” Interestingly, Warren’s earliest works had nothing to do with scriptural interpretation. His interest was in magic, and his first published title was Action with Cards (1944).

“It was sort of imbecilic for a fifteen-year-old amateur magician to have the audacity to write a book and send it to one of the nation’s leading magic houses,” Warren says. But having a total of three books published by the L.L. Ireland Magic Company—before the age of 20—gave him a surge of confidence. In later years, he applied his confidence and writing talent to the Youth for Christ (YFC) ministry.

Warren wrote many articles and guidebooks for YFC over a three-year period, but not all his manuscripts were seen by the public eye. One effort in particular, The Life I Now Live, based on Galatians 2:20, was never published. The reason, Warren explains with his characteristic humor, is simple: it was “a terrible book…Whenever I want to aggravate my wife, all I have to say is, ‘I think I’ll get out that Galatians 2:20 manuscript and work on it.’” Fortunately, Warren’s good manuscripts far outnumbered the “terrible” ones, and he was eventually hired by Moody Press to write three books.

The much-sought-after author then moved on to writing books for Calvary Baptist Church. It was during his ten years at Calvary that Expository Outlines on the New Testament and Expository Outlines on the Old Testament took shape. These two works later became the foundation of Warren’s widely popular Bible studies known as the Be series, featuring such titles as Be Loyal (a study on Matthew) and Be Delivered (a study on Exodus). Several of these books have been translated into Spanish.

His next avenue of ministry was Chicago’s Moody Memorial Church, where he served for seven years. He wrote nearly 20 books at Moody before moving to Lincoln, Nebraska, where he and his wife, Betty, now live. Prior to relocating, he had been the senior pastor of Moody Church, a teacher at Trinity Evangelical Divinity School, and a producer of the Back to the Bible radio program.

During all these years of ministry, Warren held many more posts and took part in other projects too numerous to mention. His accomplishments are extensive, and his catalog of biblical works is indeed impressive and far-reaching (many of his books have been translated into other languages). But Warren has no intention of slowing down any time soon, as he readily explains: “I don’t like it when people ask me how I’m enjoying my ‘retirement,’ because I’m still a very busy person who is not yet living on Social Security or a pension. Since my leaving Back to the Bible, at least a dozen books have been published, and the Lord willing, more are on the way.”