See part one in this series, Why Is Christianity on Decline in America?

Part 2: In the Discussion of Ross Douthat’s “Bad Religion” by Dr. Tim Keller

(1)  political polarization that has sucked churches into its vortex;

(2)  the sexual revolution that has undermined the plausibility of Christian faith and practice for an entire generation;

(3)  globalization that has made the exclusive claims of Christianity seem highly oppressive;

(4)  materialism and consumerism that undermines commitment to anything higher than the self; and

(5)  alienation of the cultural elites and culture-shaping institutions from Christianity.

What, if anything, can we do about the decline of Christianity? This question has triggered an entire generation of books and blogs. Douthat’s book is mainly descriptive and critical. He even admits that the book was “written in a spirit of pessimism.” Yet he rightly responds that for any Christian, “pessimism should always be provisional.” So in his last chapter he very briefly proposes four factors that could lead to the “recovery of Christianity.”

First, he speaks of the “postmodern opportunity.” The same relativism and rootlessness that has weakened the church is also proving exhausting rather than liberating to many in our society. Even in the academy, postmodern theory is now widely seen as being in eclipse, and there is no “next big thing” on the horizon. Douthat wonders about the possibility of a kind of revolution from above—that is, a revival of Christianity among cultural elites.

Second, he notes the opposite impulse at work, the “Benedict option”—a new monasticism that does not seek engagement with culture but rather the formation of counter-cultural communities that “stand apart . . . and inspire by example rather than by engagement.” Douthat suggests that these first two measures should not be seen as completely opposed and, indeed, could benefit by being paired with one another, otherwise engaging the culture can become accommodation and being an example can become separatism and sectarianism.

Third, he cites “the next Christendom,” meaning the explosively growing Christian churches of the former Third World could evangelize the West. Under the first two proposals Douthat can name some existing efforts that hold promise, but this factor is much more than a dream. In European and North American cities literally thousands of new churches and missions have already begun under the leadership of African, Latin American, and Asian Christians.

Finally, he proposes that “an age of diminished [economic] expectations”—along with the devastation of the sexual revolution and the exhaustion of postmodern rootlessness—could lead to the masses again looking to Christianity for hope and help. A church that could welcome them, he warns, would need three qualities. First, it would have to be political without being partisan. That is, it would have to equip all its members to be culturally engaged through vocation and civic involvement without identifying corporately with one political party. Second, it would have to be confessional yet ecumenical. That is, the church would have to be fully orthodox within its theological and ecclesiastical tradition yet not narrow and harsh toward other kinds of Christians. It should be especially desirous of cooperation with non-Western Christian leaders and churches. Third, the church would not only have to preach the Word faithfully, but also be committed to beauty and sanctity, the arts, and human rights for all. In this brief section he sounds a lot like Lesslie Newbigin and James Hunter, who have described a church that can have a “missionary encounter with Western culture.”

It is worth noting that each of these positive measures takes aim at one or two of the factors that have led to decline. The Benedict option seeks to break the hold of political polarization on the church. The postmodern opportunity aims to re-engage the cultural elites. The next Christendom has already strongly undermined the contention that Christianity merely reflects Western culture and imperialism. And if there is an “age of diminished expectations,” it could erode both the materialism and even the sexual licentiousness (which always works best in the midst of material plenty) that have undermined faith.

But how successful will these be? I don’t know, but I think these are the right strategies and responses. Why? First, each of the proposals addresses one of the five barriers to faith in our culture, so we should at least attempt to deal with them. Second, though treated briefly, these are essentially the same ideas that others such as Newbigin and Hunter have proposed. That confirms them in my mind. Third, as many readers know, I simply think these are features of a biblical ministry.

Near the very end of this book, Douthat (whom I have not met as of this writing) very kindly used our Redeemer Presbyterian Church as a good example of some of the things he proposes for the church in our time. When I read it I was startled, then humbled, then strongly overwhelmed by a sense that, for all God’s kindness to us over the years, we at Redeemer are so far from realizing our goals and aims. It actually discouraged me for several days until I noticed a little quote by G. K. Chesterton that Douthat cites near the end of his book. In The Everlasting Man Chesterton surveys the many forces over the last 2,000 years that threatened and should have destroyed Christianity.

“‘Time and again,’ Chesterton noted, ‘the Faith has to all appearances gone to the dogs.’ But each time, ‘it was the dog that died.'”

This post is from Tim Keller’s blog at Redeemer City to City. 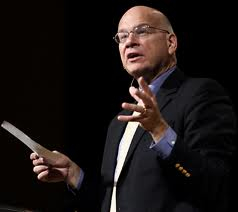 About Dr. Tim Keller: He was born and raised in Pennsylvania, and educated at Bucknell University, Gordon-Conwell Theological Seminary, and Westminster Theological Seminary. He was first a pastor in Hopewell, Virginia. In 1989 he started Redeemer Presbyterian Church in Manhattan with his wife, Kathy, and their three sons. Today, Redeemer has more than five thousand regular attendees at five services, a host of daughter churches, and is planting churches in large cities throughout the world. He is the author of a study of Mark entitled King’s Cross; The Prodigal God based on Luke 15; The Freedom of Self-Forgetfulness; Generous Justice; Counterfeit Gods; Ministries of Mercy: The Call of the Jericho Road; The Meaning of Marriage; a wonderful small group study entitled Gospel In Life; and the New York Times bestseller The Reason for God; & the forthcoming Center Church (August 2012). Tim has a passion for Jesus Christ, making the Gospel clear, church planting, and reaching cities for Christ. If you really want to understand the gospel, and how grace applies to all of life I urge you to devour his books and sermons!