Blessed Are The Persecuted! (Sometimes we feel like human lightning rods as displayed below!) 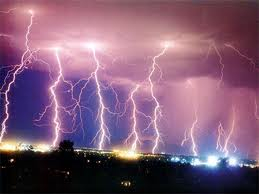 Charles Haddon Spurgeon remains one of the most colorful and gifted preachers in the history of the church. Any man who loves to preach and desires to cultivate the art and skill of communication must study Spurgeon. Before the man was 30 years old, he was the most popular preacher in England. The new Metropolitan Tabernacle was filled to overflowing every Lord’s Day as people came miles by horse and buggy to hear the gifted man handle the Word of God. They were challenged, encouraged, exhorted, fed, and built up in the Christian faith. He was truly a phenomenon.

As a result, he also became the object of great criticism by the press, by other pastors, by influential people in London, and by petty parishioners. The man, not always a model of quiet piety (to say the least), had numerous enemies. Normally, he handled the criticism fairly well . . . but finally, it began to get to him. He began to slump beneath the attacks. The persecution started to take a severe toll on his otherwise resilient spirit.

I am told that his wife, seeing the results of those verbal blows on her husband, decided to assist him in getting back on his feet and regaining his powerful stature in the pulpit.

She found in her Bible Matthew 5:10-12 and she printed the words of this passage on a large sheet of paper. Then she tacked that sheet to the ceiling of their bedroom, directly above Charles’s side of the bed! Every morning, every evening, when he would rest his enormous frame in his bed, the words were there to meet and to encourage him.

“Blessed are those who have been persecuted for the sake of righteousness, for theirs is the kingdom of heaven. Blessed are you when people insult you and persecute you, and falsely say all kinds of evil against you because of Me. Rejoice and be glad, for your reward in heaven is great; for in the same way they persecuted the prophets who were before you.”

The large sheet of paper remained fixed to the ceiling for an extended period of time until it had done the job. May Mrs. Spurgeon’s tribe increase! It is refreshing to think how a marriage partner can be such a vital channel of encouragement.

And it is also encouraging to see that we have no corner on the problem of persecution. Did you observe what Christ said? “In the same way they persecuted the prophets who were before you.” Servants, that statement will help us call a halt to the next pity-party we are tempted to throw for ourselves. We are not alone. Persecution has been going on for centuries.

About the Author: In the summer of 1977, the sermons that Chuck Swindoll preached at the First Evangelical Free Church in Fullerton, California, were broadcast on twenty-seven stations in the United States. Listeners responded immediately to the lively message of this down-to-earth pastor who could communicate God’s truth in terms they could understand and apply to their lives. In 1979, the radio ministry of Insight for Living was officially born, beginning on just a handful of stations. Today, more than two thousand stations carry the program around the world in seven different languages.

Two passions have directed the life and ministry of Chuck Swindoll: an unwavering commitment to the practical communication and application of God’s Word and an untiring devotion to seeing lives transformed by God’s grace. Chuck has devoted more than four decades to these goals, and he models the contagious joy that springs from enthusiastically following Jesus Christ

While on the island of Okinawa during his tour of duty in the United States Marine Corps, Chuck recognized that the Lord was calling him to devote his life to the gospel ministry. With Cynthia, his partner in life for more than fifty-one years, Chuck has devoted himself to the challenge of communicating practical, biblical truth and its application in the context of God’s grace.

After being honorably discharged from the Marine Corps, Chuck enrolled in Dallas Theological Seminary [DTS]. Chuck’s course of study at DTS and the lifelong mentors he met there have permanently marked his life and the course of his ministry.

Chuck has also received four honorary doctorate degrees in recognition of his outstanding contributions to ministry:

For more than forty years, Chuck’s pulpit ministry has emphasized the grace of God alongside an uncompromising commitment to practical, biblical truth and its application. He has served the following congregations in his pastoral ministry:

As a pastor, Chuck has received the following awards:

Ranked second to Rev. Billy Graham in a 2009 survey which asked 800 Protestant pastors to name the living Christian preachers who most influenced them (survey conducted by LifeWay Research).

Chuck’s congregation extends far beyond the local church body. Through the Insight for Living broadcast, Chuck’s teaching is on the air in every major Christian radio market in all fifty states and  through more than 2,100 outlets worldwide in numerous foreign languages, and it is also available to an exploding Webcast and podcast audience. While Chuck serves as chairman of the board, his wife, Cynthia, serves as president and chief executive officer of Insight for Living. They have directed its expansion to become one of the leading radio programs in Christian broadcasting. Their leadership has made Chuck’s messages accessible to 100 percent of the world’s population. Headquartered in Plano, Texas, Insight for Living now has a staff of over 125 employees. We also maintain offices in Melbourne for our Australian listeners, in Brasilia for our Brazilian listeners, in Vancouver for our Canadian listeners, and in London for our listeners in the United Kingdom.

As teacher on Insight for Living, Chuck has received the following awards:

Chuck’s prolific writing ministry has blessed the body of Christ for over thirty years. Beginning with You and Your Child in 1977, Chuck has contributed more than seventy titles to a worldwide reading audience. His most popular books in the Christian Bookseller’s Association include: Strengthening Your Grip, Improving Your Serve, Dropping Your Guard, Living on the Ragged Edge, Living Above the Level of Mediocrity, The Grace Awakening, Simple Faith, Laugh Again, The Finishing Touch, Intimacy with the Almighty, Suddenly One Morning, The Mystery of God’s Will, Wisdom for the Way, The Darkness and the Dawn, A Life Well Lived, and the Great Lives from God’s Word series, which includes Joseph, David, Esther, Moses, Elijah, Paul, Job, Jesus: The Greatest Life of All, and his most recent addition, The Church Awakening: An Urgent Call for Renewal.

As a writer, Chuck has received the following awards:

Twelve Gold Medallion Awards, more than any other Christian author to date

After serving as Dallas Theological Seminary’s fourth president for seven years (1994–2001), Chuck became the seminary’s chancellor in 2001. As the sixth-largest seminary in the world, DTS’s primary goal is to equip godly servant-leaders for the proclamation of God’s Word and the building up of the body of Christ worldwide, a mission Chuck wholeheartedly supports in his life and teaching. He continues to uphold the school’s motto, “Preach the Word,” as he serves in leadership at Dallas Theological Seminary, at Insight for Living, and at Stonebriar Community Church.