The Word became flesh and made his dwelling among us. We have seen his glory, the glory of the One and Only, who came from the Father, full of grace and truth. JOHN 1:14 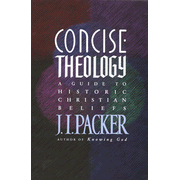 The moment of truth regarding the doctrine of the Trinity came at the Council of Nicaea (A.D.325), when the church countered the Arian idea that Jesus was God’s first and noblest creature by affirming that he was of the same “substance” or “essence” (i.e., the same existing entity) as the Father. Thus there is one God, not two; the distinction between Father and Son is within the divine unity, and the Son is God in the same sense as the Father is. In saying that Son and Father are “of one substance,” and that the Son is “begotten” (echoing “only-begotten,” John 1:14, 18; 3:16, 18, and NIV text notes) but “not made,” the Nicene Creed unequivocally recognized the deity of the man from Galilee.

A crucial event for the church’s confession of the doctrine of the Incarnation came at the Council of Chalcedon (A.D.451), when the church countered both the Nestorian idea that Jesus was two personalities—the Son of God and a man—under one skin, and the Eutychian idea that Jesus’ divinity had swallowed up his humanity. Rejecting both, the council affirmed that Jesus is one divine-human person in two natures (i.e., with two sets of capacities for experience, expression, reaction, and action); and that the two natures are united in his personal being without mixture, confusion, separation, or division; and that each nature retained its own attributes. In other words, all the qualities and powers that are in us, as well as all the qualities and powers that are in God, were, are, and ever will be really and distinguishably present in the one person of the man from Galilee. Thus the Chalcedonian formula affirms the full humanity of the Lord from heaven in categorical terms.

The Incarnation, this mysterious miracle at the heart of historic Christianity, is central in the New Testament witness. That Jews should ever have come to such a belief is amazing. Eight of the nine New Testament writers, like Jesus’ original disciples, were Jews, drilled in the Jewish axiom that there is only one God and that no human is divine. They all teach, however, that Jesus is God’s Messiah, the Spirit-anointed son of David promised in the Old Testament (e.g., Isa. 11:1-5; Christos, “Christ,” is Greek for Messiah). They all present him in a threefold role as teacher, sin-bearer, and ruler—prophet, priest, and king. And in other words, they all insist that Jesus the Messiah should be personally worshiped and trusted—which is to say that he is God no less than he is man. Observe how the four most masterful New Testament theologians (John, Paul, the writer of Hebrews, and Peter) speak to this.

The writer to the Hebrews, purporting to expound the perfection of Christ’s high priesthood, starts by declaring the full deity and consequent unique dignity of the Son of God (Heb. 1:3, 6, 8-12), whose full humanity he then celebrates in chapter 2. The perfection, and indeed the very possibility, of the high priesthood that he describes Christ as fulfilling depends on the conjunction of an endless, unfailing divine life with a full human experience of temptation, pressure, and pain (Heb. 2:14-17; 4:14-5:2; 7:13-28; 12:2-3).

Not less significant is Peter’s use of Isaiah 8:12-13 (1 Pet. 3:14). He cites the Greek (Septuagint) version, urging the churches not to fear what others fear but to set apart the Lord as holy. But where the Septuagint text of Isaiah says, “Set apart the Lord himself,” Peter writes, “Set apart Christ as Lord” (1 Pet. 3:15). Peter would give the adoring fear due to the Almighty to Jesus of Nazareth, his Master and Lord.

The New Testament forbids worship of angels (Col. 2:18; Rev. 22:8-9) but commands worship of Jesus and focuses consistently on the divine-human Savior and Lord as the proper object of faith, hope, and love here and now. Religion that lacks these emphases is not Christianity. Let there be no mistake about that!

From: Concise Theology: A Guide To Historic Christian Beliefs