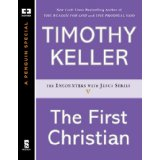 The First Christian is an exploration of the paradox that Christian faith is both impossible and irrational. Keller demonstrates how this paradox is true in light of the resurrection account as told by John in chapter 20 of his Gospel. In this essay by Keller we learn what true faith is about in the light of Jesus’ encounter with Mary Magdalene after his rising from the dead.

The impossibility of faith resides in the fact that all people are spiritually dead. Despite Jesus’ many references to his death and resurrection his disciples totally failed to recognize Jesus immediately after his rising from the grave. When Mary sees the empty tomb she immediately thought that Jesus’ body was stollen. The reality is that whether in the first or twenty first century belief in the resurrection of Christ doesn’t come naturally to anyone. All theological traditions agree that we can’t produce saving faith in Jesus solely through our own ability. The reality is that saving faith is impossible without the supernatural intervention of God Himself. Therefore in the first section of this essay Keller explores our natural skepticism and how to deal with our doubts.

In the second half of the essay Keller shows how rational biblical faith is. The faith of the first Christians was the result of a personal encounter with Jesus – based on objective evidence. During the time of Christ (much like in today’s skeptical climate) Jews, Greeks, and Romans all denied the possibility of a physical resurrection. Salvation was primarily viewed as the liberation of the soul from the body. Keller explores several of the reasons why the disciples were initially so skeptical of the resurrected Jesus. The disciples were no more expecting a bodily resurrection of Christ than people in the twenty-first century are.

Keller goes on to show the evidence required of a skeptic (whether back then or now) to actually believe in a resurrected Christ. He gives a compelling argument for the literal bodily resurrection of Christ and how it objectively provides the evidence necessary for a cogent faith.

Tim states it this way, “What kind of evidence would you need in order to believe that Jesus Christ was the Son of God, resurrected from the dead? Whatever that evidence is, you can reasonably conclude that they must have had something like it. And if that’s so, the evidence that convinced them and brought them to faith might be enough to convince you too.”

In this essay Keller provides the skeptic with much food for thought in giving a convincing argument for why faith in Jesus leads to salvation, and fortifies the existing faith of the Christian giving him or her rational reasons for why faith in Christ makes sense in this life, and the one to come.