Series: Presentations of the Gospel #2

THE QUEST FOR JOY by Dr. John Piper 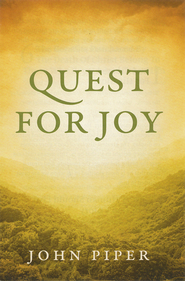 Did you know that God commands us to be glad?

“Delight yourself in the Lord and he will give you the desires of your heart.” (Psalm 37:4)

1) God created us for his glory

“Bring my sons from afar and my daughters from the ends of the earth,… whom I created for my glory.” (Isaiah 43:6-7)

God made us to magnify his greatness – the way telescopes magnify stars. He created us to put his goodness and truth and beauty and wisdom and justice on display. The greatest display of God’s glory comes from deep delight in all that he is. This means that God gets the praise and we get the pleasure. God created us so that he is most glorified in us when we are most satisfied in him.

2) Every human should live for God’s glory

If God made us for his glory, it is clear that we should live for his glory. Our duty comes from his design. So our first obligation is to show God’s value by being satisfied with all that he is for us. This is the essence of loving God (Matthew 22:37) and trusting him (1 John 5:3-4) and being thankful to him (Psalm 100:2-4) It is the root of all true obedience, especially loving others (Colossians 1:4-5).

What does it mean to “fall short of the glory of God?” It means that none of us has trusted and treasured God the way we should. We have not been satisfied with his greatness and walked in his ways. We have sought our satisfaction in other things, and treated them as more valuable than God, which is the essence of idolatry (Romans 1:21-23). Since sin came into the world we have all been deeply resistant to having God as our all-satisfying treasure (Ephesians 2:3). This is an appalling offense to the greatness of God (Jeremiah 2:12-13).

4) All of us are subject to God’s just condemnation

We have all belittled the glory of God. How? By preferring other things above him. By our ingratitude, distrust and disobedience. So God is just in shutting us out from the enjoyment of his glory forever. “They will suffer the punishment of eternal destruction and exclusion from the presence of the Lord and from the glory of his might” (2 Thessalonians 1:9).

The word “hell” is used in the New Testament fourteen times—twelve times by Jesus himself. It is not a myth created by dismal and angry preachers. It is a solemn warning from the Son of God who died to deliver sinners from its curse. We ignore it at great risk.

If the Bible stopped here in its analysis of the human condition, we would be doomed to a hopeless future. However, this is not where it stops…

“Here is a trustworthy saying that deserves full acceptance: Christ Jesus came into the world to save sinners…” (1 Timothy 1:15)

The good news is that Christ died for sinners like us. And he rose physically from the dead to validate the saving power of his death and to open the gates of eternal life and joy (1 Corinthians 15:20). This means God can acquit guilty sinners and still be just (Romans 3:25-26). “For Christ died for sins once for all, the righteous for the unrighteous, to bring us to God” (1 Peter 3:18). Coming home to God is where all deep and lasting satisfaction is found.

“Repent” means to turn from all the deceitful promises of sin. “Faith” means being satisfied with all that God promises to be for us in Jesus. “He who believes in me,” Jesus says, “shall never thirst” (John 6:35). We do not earn our salvation. We cannot merit it (Romans 4:4-5). It is by grace through faith (Ephesians 2:8-9). It is a free gift (Romans 3:24). We will have it if we cherish it above all things (Matthew 13:44). When we do that, God’s aim in creation is accomplished: He is glorified in us and we are satisfied in him – forever.

Does this make sense to you?

Do you desire the kind of gladness that comes from being satisfied with all that God is for you in Jesus? If so, then God is at work in your life.

What should you do?

Turn from the deceitful promises of sin. Call upon Jesus to save you from the guilt and punishment and bondage. “All who call upon the name of the Lord will be saved” (Romans 10:13). Start banking your hope on all that God is for you in Jesus. Break the power of sin’s promises by faith in the superior satisfaction of God’s promises. Begin reading the Bible to find his precious and very great promises, which can set you free (2 Peter 1:3-4). Find a Bible-believing church and begin to worship and grow together with other people who treasure Christ above all things (Philippians 3:7).

The best news in the world is that there is no necessary conflict between our happiness and God’s holiness. Being satisfied with all that God is for us in Jesus magnifies him as a great Treasure.

“You have made known to me the path of life; you will fill me with joy in your presence, with eternal pleasures at your right hand.” (Psalm 16:11)

“The ministry of preaching is the central labor of my life. My prayer is that through that ministry and everything else I do, the great glory of our God and Savior Jesus Christ would be magnified as more and more people come to live out the obedience of faith more and more deeply.” – John Piper

John Stephen Piper was born January 11, 1946, in Chattanooga, Tennessee, to Bill and Ruth Piper. His father was a traveling evangelist, and the Pipers lived near Chattanooga to be near a Christian college for which Bill served on the board. When the school moved to Greenville, South Carolina, the Pipers moved as well, and it was in Greenville that John spent his growing-up years. John honored his father in a 2008 biographical message called “Evangelist Bill Piper: Fundamentalist Full of Grace and Joy” and in the 2013 ebook A Tribute to My Father. John also wrote a tribute to his mother, who died in 1974, in the book What’s the Difference, and commended her in his Mother’s Day sermon in 2005, “Honoring the Biblical Call of Motherhood: A Tribute to Ruth Piper.”

John graduated from Wade Hampton High School in 1964, and he majored in Literature and minored in Philosophy at Wheaton College (1964–68). Studying Romantic Literature with Clyde Kilby stimulated the poetic side of his nature, and today he regularly writes poems to celebrate special family occasions and rich, biblical truths. At Wheaton, John also met Noël Henry whom he married in 1968.

Following college, he completed a Bachelor of Divinity degree at Fuller Theological Seminary in Pasadena, California (1968–71). While at Fuller, John discovered the writings of Jonathan Edwards.

John did his doctoral work in New Testament Studies at the University of Munich in Munich, Germany (1971–74). His dissertation, Love Your Enemies, is now available through Crossway Books. Upon completion of his doctorate, he went on to teach Biblical Studies at Bethel College in St. Paul, Minnesota for six years (1974–80).

In 1980, sensing an irresistible call to preach, John became the senior pastor of Bethlehem Baptist Church in Minneapolis, Minnesota, where he ministered for 33 years, until Easter 2013. Together with his people, John was dedicated to spreading a passion for the supremacy of God in all things for the joy of all peoples through Jesus Christ — a mission he continues now for the wider church through the ministry of desiringGod.org.

John is the author of over 50 books and now frequently travels to speak, and writes regularly, through Desiring God. He also became chancellor of Bethlehem College & Seminary at its founding in 2009 and continues to serve as both chancellor and professor.

John and Noël have four sons, a daughter, and twelve grandchildren.