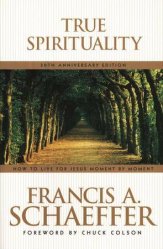 Spirituality for The Real World

In the introduction to this book on sanctification (how to live the Christian life) Francis Schaeffer says that it should have been his first book. In most of his books he is primarily concerned with engaging the mind, but this is a book that is primarily concerned with engaging the heart. He didn’t write this book until 1971, but wrestled with its contents mainly in 1953 and 1954 while on furlough from his ministry in Switzerland. Much of the material in this book came from Schaeffer’s wrestling with the reality of Christianity. He was wrestling with whether or not Christianity was true, and whether or not this truth in application really worked in the real world.

Here’s what Schaeffer discovered as God brought him out of his crises of faith:

(1) He found a solid foundation for how own faith and life. He became convinced again that the Bible answers the most basic questions that all humans can ask. This gave him delight in the biblical message as the source of the only true explanation of our existence.

(3) In the same way, he was being prepared to deal with the great barrage of questions, doubts, and hurts that would come at him from Christians who were struggling with their faith, for in the years to come many of these people would come to his home at L’Abri for answers.

(4) Prayer became more real to him and the supernatural realities of God’s working in his life and the lives of those he ministered to became paramount to the success of L’Abri. He would often say, “How many churches and ministries would not even notice and would carry on in exactly the same manner as usual, even though every reference to dependence on the Holy Spirit and to prayer were suddenly to disappear from the pages of the New Testament!”

5) He discovered that the central, unfolding theme of God’s revelation is the love shown by God to us, and the trusting and dependent love that we are called to show Him in return.

In thirteen chapters Schaeffer does a masterful job of showing that that Christian life involves the head, heart, and hands and biblically, theologically, and practically develops the following four themes:

(2) It is not just a desire to get rid of taboos in order to live an easier and a looser life. Our desire must be for a deeper life. And when I begin to think about this, the Bible presents to me the whole of the Ten Commandments and the whole of the Law of Love.

(3) True spirituality, the true Christian life, is not just outward, but it is inward–it is not to covet against God and mankind.

(4) The Christian life is positive–positive in inward reality, and then positive in outward results. The inward thing is to be positive and not just negative, and then sweeping out of the inward positive reality, there is to be a positive manifestation externally. It is not just that we are dead to certain things, but we are to love God, we are to be alive to Him, we are to be in communion with Him, in this present moment of history. And we are to love men, to be alive to men as men, and to be in communication on a true personal level with men, in this present moment of history.

Schaeffer does a wonderful job of addressing the world, the flesh, and the devil; as well as helping you find freedom from the bondage of sin. He also shows the antithesis of Christian living in comparing the reality of Christianity with the unreality of other religions and world-views.  I highly recommend this book in helping you understand the wonderful and exhilierating doctrine of sanctification.