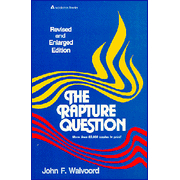 For the sake of brevity, the term rapture or translation is used for the coming of Christ for His church, while the term second coming is uniformly used as a reference to His coming to the earth to establish His millennial kingdom, an event that all consider posttribulational. While the words rapture and translation are not quite identical, they refer to the same event. By the term rapture, reference is made to the fact that the church is “caught up” from the earth and taken to heaven. By the term translation the thought is conveyed that those who are thus raptured are transformed in their physical bodies from natural and corruptible bodies to spiritual, incorruptible, and immortal bodies. Strictly speaking, the dead are raised while the living are translated. In common usage, however, this distinction is not normally maintained.

1. While posttribulationism appeared as early as 2 Thessalonians 2, many in the early church believed in the imminency of the Lord’s return, which is an essential doctrine of pretribulationism.

2. The detailed development of pretribulational truth during the past few centuries does not prove that the doctrine is new or novel. Its development is similar to that of other major doctrines in the history of the church. Hermeneutics

3. Pretribulationism is the only view that allows literal interpretation of all Old and New Testament passages on the Great Tribulation.

4. Pretribulationism distinguishes clearly between Israel and the church and their respective programs.

Nature of the Tribulation

5. Pretribulationism maintains the scriptural distinction between the Great Tribulation and tribulation in general that precedes it.

6. The Great Tribulation is properly interpreted by pretribulationists as a time of preparation for Israel’s restoration (Deut. 4:29-30; Jer. 30:4-11). It is not the purpose of the Tribulation to prepare the church for glory.

Nature of the Church

12. The translation of the church is never mentioned in any passage dealing with the second coming of Christ after the Tribulation.

15. The possibility of a believer escaping the Tribulation is mentioned in Luke 21:36.

16. The church of Philadelphia was promised deliverance from “the hour of trial that is going to come upon the whole world to test those who live on the earth” (Rev. 3:10).

17. It is characteristic of divine dealing to deliver believers before a divine judgment is inflicted on the world as illustrated in the deliverance of Noah, Lot, Rahab, etc. (2 Peter 2:5-9).

18. At the time of the translation of the church, all believers go to the Father’s house in heaven (John 14:3) and do not immediately return to the earth after meeting Christ in the air as posttribulationists teach.

19. Pretribulationism does not divide the body of Christ at the Rapture on a works principle. The teaching of a partial rapture is based on the false doctrine that the translation of the church is a reward for good works. It is rather a climactic aspect of salvation by grace.

21. As opposed to a view of a partial rapture, pretribulationism is founded on the definite teaching of Scripture that the death of Christ frees from all condemnation.

22. The godly remnant of the Tribulation are pictured as Israelites, not members of the church as maintained by the posttribulationists.

23. The pretribulational view, as opposed to posttribulationism, does not confuse general terms like elect and saints, which apply to the saved of all ages, with specific terms like church and those in Christ, which refer to believers of this age only.

24. The pretribulational interpretation teaches that the coming of Christ is actually imminent.

25. The exhortation to be comforted by the coming of the Lord (1 Thess. 4:18) is very significant in the pretribulational view and is especially contradicted by most posttribulationists.

26. The exhortation to look for “the glorious appearing” of Christ to His own (Titus 2:13) loses its significance if the Tribulation must intervene first. Believers in that case should look for signs.

27. The exhortation to purify ourselves in view of the Lord’s return has most significance if His coming is imminent (1 John 3:2-3).

The Work of the Holy Spirit

29. The Holy Spirit as the restrainer of evil cannot be taken out of the world unless the church, which the Spirit indwells, is translated at the same time. The Tribulation cannot begin until this restraint is lifted.

30. The Holy Spirit as the restrainer must be taken out of the world before “the lawless one,” who dominates the tribulation period, can be revealed (2 Thess. 2:6-8).

31. If the expression “except there come a falling away first” (KJV) is translated literally, “except the departure come first,” it would plainly show the necessity of the Rapture taking place before the beginning of the Tribulation.

Necessity of an Interval Between the Rapture and the Second Coming

32. According to 2 Corinthians 5:10, all believers of this age must appear before the judgment seat of Christ in heaven, an event never mentioned in the detailed accounts connected with the second coming of Christ to the earth.

33. If the twenty-four elders of Revelation 4:1-5:14 are representative of the church as many expositors believe, it would necessitate the rapture and reward of the church before the Tribulation.

34. The coming of Christ for His bride must take place before the Second Coming to the earth for the wedding feast (Rev. 19:7-10).

35. Tribulation saints are not translated at the second coming of Christ but carry on ordinary occupations such as farming and building houses, and they will bear children (Isa. 65:20-25). This would be impossible if all saints were translated at the Second Coming to the earth, as posttribulationists teach.

36. The judgment of the Gentiles following the Second Coming (Matt. 25:31-46) indicates that both saved and unsaved are still in their natural bodies. This would be impossible if the translation had taken place at the Second Coming.

37. If the translation took place in connection with the Second Coming to the earth, there would be no need of separating the sheep from the goats at a subsequent judgment, but the separation would have taken place in the very act of the translation of the believers before Christ actually sets up His throne on earth (Matt. 25:31).

38. The judgment of Israel (Ezek. 20:34-38), which occurs subsequent to the Second Coming, indicates the necessity of regathering Israel. The separation of the saved from the unsaved in this judgment obviously takes place sometime after the Second Coming and would be unnecessary if the saved had previously been separated from the unsaved by translation.

Contrasts Between the Rapture and the Second Coming

39. At the time of the Rapture the saints meet Christ in the air, while at the Second Coming Christ returns to the Mount of Olives to meet the saints on earth.

40. At the time of the Rapture the Mount of Olives is unchanged, while at the Second Coming it divides and a valley is formed to the east of Jerusalem (Zech. 14:4-5).

42. At the Rapture the saints go to heaven, while at the Second Coming to the earth the saints remain on the earth without translation.

43. At the time of the Rapture the world is unjudged and continues in sin, while at the Second Coming the world is judged and righteousness is established in the earth.

44. The translation of the church is pictured as a deliverance before the day of wrath, while the Second Coming is followed by the deliverance of those who have believed in Christ during the Tribulation.

45. The Rapture is described as imminent, while the Second Coming is preceded by definite signs.

46. The translation of living believers is a truth revealed only in the New Testament, while the Second Coming with its attendant events is a prominent doctrine of both Testaments.

47. The Rapture concerns only the saved, while the Second Coming deals with both saved and unsaved.

48. At the Rapture Satan is not bound, while at the Second Coming Satan is bound and cast into the abyss.

49. No unfulfilled prophecy stands between the church and the Rapture, while many signs must be fulfilled before the Second Coming.

50. No passage dealing with the resurrection of saints at the Second Coming ever mentions translation of living saints at the same time. The blessed hope of the return of the Lord for His church is a precious aspect of faith and expectation. While learned and devout saints have not always agreed as to the content of this hope, the present discussion has attempted to justify this important aspect of truth. May the promise of our Lord “I will come back and take you to be with me that you also may be where I am” (John 14:3) bring comfort and hope to us in a modern world as it was intended to do for the disciples in the upper room on that dark night before the Crucifixion. “The Spirit and the bride say, ‘Come!’ And let him who hears say, ‘Come!’…He who testifies to these things says, ‘Yes, I am coming soon’“ (Rev. 22:17, 20).

John F. Walvoord (May 1, 1910 – December 20, 2002) was a Christian theologian, pastor, and president of Dallas Theological Seminary from 1952 to 1986. He was the author of over 30 books, focusing primarily on eschatology and theology including The Rapture Question, and was co-editor of The Bible Knowledge Commentary with Roy B. Zuck. He earned AB and DD degrees from Wheaton College, an AM degree from Texas Christian University in philosophy, a ThB, ThM, and ThD in Systematic Theology from Dallas Theological Seminary, and a LittD from Liberty Baptist Seminary.

Walvoord was brought up in a Christian home, but had little interest in the faith until he was fifteen, when his family moved to Racine after his father accepted a position as superintendent of the junior high. They joined the Union Gospel Tabernacle where he committed his life to Christ after attending a Bible study on Galatians.

After continuing his education at Wheaton College, Walvoord went on to Texas Christian University and Dallas Theological Seminary where he completed his ThD in 1936. Seminary president and mentor Lewis Sperry Chafer appointed Walvoord registrar. During his tenure, he also taught systematic theology at the seminary, and pastored the Rosen Heights Presbyterian church in Fort Worth. Walvoord became more involved in the administration of the school, serving as Chafer’s assistant and secretary to the faculty, and upon Chafer’s death in 1952, became the seminary’s second president where he served until his retirement in 1986.

In addition to his responsibilities at the seminary, Walvoord earned a reputation as one of the most influential dispensational theologians of the 20th century and played a prominent role in advocating a rapture of Christians from the earth prior to a time of great tribulation, followed by a literal thousand-year millennial reign of Christ, and a renewed focus of God on the nation of Israel as distinct from the church.

The Blessed Hope and the Tribulation: A Historical and Biblical Study of Posttribulationism (1976).

The Holy Spirit: A Comprehensive Study of the Person and Work of the Holy Spirit Chicago: Moody Press (1991).

Matthew: Thy Kingdom Come, The Moody Bible Institute of Chicago (1974).

Every Prophecy of the Bible. Colorado Springs: Cook Communications (1990, 2011).