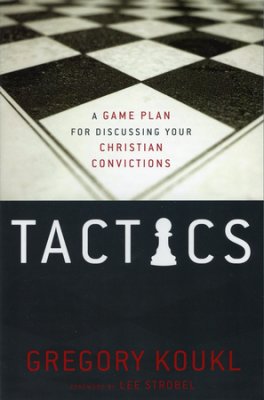 How To Winsomely Build Bridges With Non-Believers

Living in one of the least churched areas in the USA (Bay Area, Northern California) I am always looking for better ways to build bridges with non-believers. I have found that many of the old ways I was trained in (e.g., 4 spiritual laws, and various tracts) assume a common world-view. However, we aren’t “in Kansas” anymore as the saying goes. Times have changed and are ever changing rapidly. In our cultural climate we can either retreat or engage. Tactics is a tool for those who wish to engage – and a very helpful tool it is indeed.

What I love about this book is that it helps Christians (of all stripes) engage non-believers in a very simple manner. Koukl helps you become a better engager by looking for opportunities, asking good questions, and listening well so as to build bridges toward understanding, and ultimately truth. All truth is God’s truth and Koukl gives examples of how to arrive at moral truth, philosophical truth, scientific truth, and religious truth.

One of the strategies Koukl highlights in his book is letting the other person defeat their own view by asking them to share what they believe. If what the person believes is false it will manifest itself as false eventually through our questioning (essentially they end up shooting themselves in the foot). At this point they may want to consider the truth claims of the Christian worldview. He gives many examples of how to do this from his own experiences in conversations and debates with non-believers.

One of the key illustrations used over and over again in the book is that of the beloved Lieutenant Columbo (the homicide detective played by actor Peter Falk). Columbo would always solve murder cases by asking good questions, being a good listener, and controlling each case (usually unbeknownst to the murderer) until the case was solved. Koukl uses a plethora of examples to drive the “Columbo method” home.

Koukl masterfully weaves case scenarios throughout the book and demonstrates how we can utilize the tactical methods of Columbo to gain a hearing and build bridges with anyone. I highly recommend this book for Christians who are interested in evangelism and apologetics. It’s also filled with ethical examples as well.  I will continue to personally use principles from this book and train those I disciple to do likewise. Koukl has blessed followers of Christ with a wonderful resource to help all believers be better equipped to strategically and effectively influence those of differing views to consider the cogency of the Christian Worldview.