Series: On This Day In Christian History 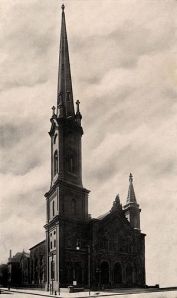 As a boy, James Montgomery Boice attended Tenth Presbyterian Church in Philadelphia with his family. He loved his pastor, Donald Grey Barnhouse, and he was an avid listener to Barnhouse’s radio program, The Bible Study Hour. At the age of twelve Boice decided he wanted to become a minister. Little did he know how closely he would follow in his beloved minister’s footsteps (Tenth Presbyterian Church in Philadelphia pictured left).

Boice attended Harvard, where he received a degree in English literature. There he met his future wife, Linda Ann McNamara, at InterVarsity Christian Fellowship. She received a master of arts from Harvard, and they shared a dream of creating a Christian college preparatory school for needy inner-city youth.

After Harvard, Boice went to seminary top prepare himself for becoming a minister. He then married Linda, and they moved to Switzerland so Jim could study at the University of Basel. After he received his doctorate, they settled in Washington, D.C., where he worked for the magazine Christianity Today.

In 1968 Tenth Presbyterian Church in Philadelphia, the church of his youth, called him to be their pastor. In 1969 he also became the speaker for The Bible Study Hour. Boice continued Barnhouse’s legacy of providing clear, intellectual, heartfelt expository preaching to the Tenth Presbyterian congregation. Under Boice’s leadership the church grew in numbers, budget, and outreach programs. The church became ethnically diverse and intensely missions focused. Many of its ministries grew out of inner-city location: ministries to internationals, HIV positive individuals, inner-city youth, women with crisis pregnancies, and the homeless. Jim and Linda achieved their dream of a Christian college preparatory school for needy inner-city youth with the creation of City Center Academy, which was started and run by Tenth Presbyterian. Despite the lack of parking in its downtown location , the church has well over a thousand members.

In the 1970’s Boice started the Philadelphia Conference on Reformed Theology, which spawned many similar conferences in cities throughout the country. In 1977 he founded the International Council on Biblical Inerrancy, a topic on which he frequently wrote. In all he wrote or contributed to more than sixty books. Under Boice’s leadership Tenth Presbyterian left the Presbyterian USA in 1981 and joined the Presbyterian Church in America, a denomination that conformed more closely to the church’s Reformed theological beliefs.

On Good Friday 2000, two hours before he was to preach, Dr. Boice learned that he had an aggressive form of liver cancer. His prognosis was not good.

Jim Boice (pictured on left) mounted the pulpit of Tenth Presbyterian for the last time on Sunday, May 7, 2000. He announced to his stunned congregation that he was rapidly dying of cancer. He said to them: “Should you pray for a miracle? Well, you’re free to do that, of course. My general impression is that the God who is able to perform miracles—and he certainly can—is also able to keep you from getting the problem in the first place…Above all, I would say pray for the glory of God. If you thin of God glorifying himself in history and you say, “Where in all of history has God most glorified himself?’ the answer is that he did it at the cross of Jesus Christ, and it wasn’t by delivering Jesus from the cross, though he could have…And yet that’s where God is most glorified.”

On June 15, 2000, at the age of sixty-one, James Montgomery Boice died peacefully in his sleep, just eight weeks after his diagnosis.

How do you think you would react if you were given news of your impending death?

Dr. Boice’s inclination was not to pray for a miracle but rather to pray that Christ be glorified in his death.

What is your reaction to what Dr. Boice told his congregation?

Author’s of the Article Above: Mike and Sharon Rusten are not only marriage and business partners; they also share a love for history. Mike studied at Princeton (B.A.), the University of Minnesota (M.A.), Westminster Theological Seminary (M.Div.), Trinity Evangelical Divinity School (Th.M.), and New York University (Ph.D.). Sharon studied at Beaver College, Lake Forest College, and the University of Minnesota (B.A.), and together with Mike has attended the American Institute of Holy Land Studies (now Jerusalem University College). Mike and Sharon have two grown children and live in Minnetonka, Minnesota. This article was adapted from the May 7th entry in their wonderful book The One Year Book of Christian History, Carol Stream, IL: Tyndale, 2003.

Elisha A Hofman: “I Must Tell of Jesus”

Many New Testament promises have corresponding verses in the Old Testament that reinforce their power. When Peter, for example, said, “God cares for you, so turn all your worries over to him” (1 Peter 5:7), he was but restating David’s words in Psalm 55:22: “Our Lord, we belong to you. We tell you what worries us, and you won’t let us fall.”

Elisha A. Hoffman loved those verses. He was born May 7, 1839 in Orwigsburg, Pennsylvania. His father was a minister, and Elisha followed Christ at a young age. He attended Philadelphia public schools, studied science, and then pursued the classics at Union Seminary of the Evangelical Association. He worked for 11 years with the association’s publishing house in Cleveland, Ohio. Then, following the death of his young wife, he returned to Pennsylvania and devoted 33 years to pastoring Benton Harbor Presbyterian Church.

Hoffman’s pastime was writing hymns, many of which were inspired by pastoral incidents. One day, for example, while calling on the destitute of Lebanon, Pennsylvania, he met a woman whose depression seemed beyond cure. She opened her heart and poured on him her pent-up sorrows. Wringing her hands, she cried, “What shall I do? Oh, what shall I do?” Hoffman knew what she should do; for he had himself learned the deeper lessons of God’s comfort. He said to the woman, “You cannot do better than to take all your sorrows to Jesus. You must tell Jesus.”

Hoffman lived to be 90, telling Jesus his burdens and giving the church such hymns as What A Wonderful Savior, Down at the Cross, Are You Washed in the Blood?, Leaning on the Everlasting Arms, and a thousand more. 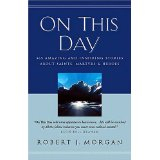 The Scriptures say, “God opposes proud people, but he helps everyone who is humble.” Be humble in the presence of God’s mighty power, and he will honor you when the time comes. God cares for you, so turn all your worries over to him. 1 Peter 5:5b-7

About the Author: Robert J. Morgan, is the pastor of Donelson Fellowship in Nashville, Tennessee and the author of the best-selling Then Sings My Soul, From This Verse, Red Sea Rules, and On This Day – this article was adapted from the May 7th entry in this excellent book. He conducts Bible conferences, parenting and marriage retreats, and leadership seminars across the country.

Significant Events on This Day:

1274: The Council of Lyons II met. The council was supposed to promote plans to reunite the Eastern and Western Churches, but nothing came of it.

1794: French revolutionaries proclaimed the worship of a “supreme being,” a Deist god.

1823: A group of Russian Orthodox missionaries left Irkust to evangelize the Aleutian Islands and Alaska.

1844: Protestants burned dozens of Irish Catholic homes and the St. Augustine Church in Kensington, a suburb of Philadelphia. The action was in retaliation for the killing of one of their own by a Catholic the day before during an ill0advised rally in the Irish streets. Protestants were outraged that Catholics would not participate in school Bible reading (the Catholics believed that Church leaders, not individuals, should interpret Scripture). In defense of their property, Catholics killed several more Protestants as the riot progressed.

1859: Guido Verbeck and his bride, Maria, destined for Shanghai, sailed from New York aboard the Surprise. With them were Rev. and Mrs. Brown and the medical missionary Duane B. Simmons and his wife. Verbeck was so notable a missionary that the Japanese honored him highly.

A. Kenneth Curtis and Daniel Graves edited This Day In Christian History. Camp Hill, PA: Christian Publications Inc., 2005. The events above were adapted from the entry for May 7th.