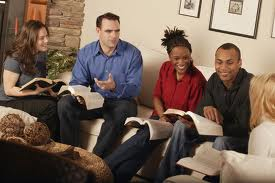 More books and conferences under the banner of disciple-making are available now than ever before. As a result, believers are contemplating the implications of the Great Commission for their lives. With a better understanding of discipleship come questions of how to replicate the process. One important facet is how many people should be discipled together. The size of your discipleship group should be considered before approaching potential group members.

I have found that the most effective discipleship groups, what we call D-Groups, are gender-exclusive. Men should meet with men, and women should meet with women. Some topics and personal problems should not be discussed in a mixed group. While it is wonderful for couples to study God’s Word and grow spiritually together, the crucial dynamic of a D-Group is compromised when couples are involved, particularly in the areas of transparency and accountability.

FIVE REASONS TO DISCIPLE IN GROUPS

While the Bible never prescribes a particular model for discipling others, Jesus invested in groups of varying sizes.[1] Larger groups learned from his teachings and miracles, while his closest followers benefited from personal discipleship and specific instruction. While one-on-one discipling is valid and has it purposes, I want you to consider five reasons to meet in a group of three to five instead of privately with one.

First, a group of two can be like a ping-pong match: you, the leader, are responsible to keep the ball in play. “Mike, how was your day?” “Good,” responds Mike. The leader probes deeper by asking, “Any insights from your Scripture reading this week?” “I enjoyed it,” Mike briefly replies. The conversation progresses only as the mentor engages the mentee. The pressure to lead is lessened when others in the group join in on the spiritual journey.

2. One-on-One can be Challenging to Reproduce

Second, a one-on-one model can be challenging to reproduce because the person in whom you are investing has a tendency to look at you in the same manner that Timothy looked at the Apostle Paul. Mentees, after a year or two in a discipling relationship, have said to me, “I could never do with another person what you did with me.” Yet a group takes a journey together. It is worth noting that group members usually don’t feel ready to begin their own groups. Neither did the disciples. But Jesus left them with no choice. Remember, the discipling relationship is not complete until the mentee becomes a mentor, the player becomes a coach.

3. Group of Two Tends to Become a Counseling Session

Third, a group of two tends to become a counseling session, where you spend the majority of your time solving personal problems. Biblical wisdom for personal issues is certainly a part of the discipling relationship, but therapeutic advice every week must not define the group.

Fourth, as mentioned earlier, Jesus utilized the group model. While he spent time investing in a group of twelve, he used teachable moments to shape three—Peter, James, and John—in a unique way. With the exception of Judas, all twelve faithfully followed the Lord, even to the point of death. But these three were the key leaders in the early years of the church.

Solomon, a financial genius and the Warren Buffett of his day, advocated the diversification of assets twenty-five hundred years before Wall Street existed (Eccl. 11:1-2). Wise people invest in a variety of stocks, bonds, and commodities. Jesus, too, believed in diversified investing and modeled it in his discipleship example. Joel Rosenberg and T.E. Koshy pose a thought-provoking question:

What if for three years Jesus had discipled only Judas? Despite his best efforts, Jesus would have wound up with no one to carry on his legacy and his message when he returned to the Father. Jesus didn’t invest in just one man. He invested in a group of men from a wide range of backgrounds, including fishermen, a tax collector, and a Zealot (a political revolutionary).[2]

Jesus poured himself into twelve men, and taught us the importance of the group in disciple-making. Yes, there are times when a one-on-one mentoring relationship is beneficial, but in the New Testament, particularly the Gospels, it is not the norm.

Paul, in similar fashion, used his missionary journeys to train others. He rarely if ever traveled alone, always including Barnabas, Silas, John Mark, Timothy, and others as gospel co-workers. When Paul charged Timothy in his final letter, he stated, “You then, my child, be strengthened by the grace that is in Christ Jesus, and what you have heard from me in the presence of many witnesses entrust to faithful men who will be able to teach others also” (2 Tim. 2:1-2). Notice that Paul says, “Entrust to faithful men”—plural—“who will teach others.” Throughout his ministry, Paul modeled this practice.

Finally, a group of three to five provides a built-in accountability system, as well as encouragement from others. In my first D-Group, two of the three men involved came prepared with a Bible-reading journal I had asked them to complete. But one, a skeptic of the system’s value, failed to make any entry. Prior to joining the D-Group, his excuse for not reading the Bible was, “It’s difficult to understand.” Using the other two men to motivate him, I countered, “Can you just try journaling for the next five days? Right now, you have no evidence to prove that it doesn’t work. By trying it, you will know if it works for you or not.” The next week, he arrived with a smile on his face, saying, “Let me share what I heard from God through his Word this week.” Watching the excitement of the others challenged him to contribute to the group, and to his own spiritual development.

What has been your experience in a discipleship group? Does size matter? If so, how?

Robby Gallaty (@Rgallaty) is the Senior Pastor of Brainerd Baptist Church in Chattanooga, TN and founder of Replicate Ministries. For more information on discipleship, you can visit replicateministries.org.

[1]The gospels record Jesus ministering in 5 group sizes: the crowd (multitudes), the committed (the 72 in Luke 10), the cell (the twelve disciples), the core (Peter, James, and John), and the close-up encounters (one-on-one). Making disciples cannot be restricted to a particular group meeting; however, a regular gathering time is practically necessary for accountability.