For the last seven years, I have spoken at a conference on the West Coast called “Resolved.” The name is drawn from the Resolutions of Jonathan Edwards and is aimed at college students and “twenty-somethings” in the next generation. As an eighteen and nineteen year old, young Edwards wrote seventy resolutions, which became his personal mission statement to guide his life. To launch the first conference, I spoke from Edward’s first resolution, what Edwards determined would be the single most important pursuit in his life — the glory of God.

Edwards began his Resolutions with what he desired to be the driving force of his life — an all-absorbing passion to pursue the glory of God. “Resolved: that I will do whatsoever I think to be most to God’s glory and to my own good, profit, and pleasure, in the whole of my duration, without any consideration of the time, whether now or never so many myriads of ages hence. Resolved: to do whatever I think to be my duty, and most for the good and advantage of mankind in general. Resolved: to do this whatever difficulties I meet with, how ever so many and how ever so great.”

With this before his eyes weekly, this first resolution set the tone for his entire life. In every arena, he resolved to honor God supremely. Everything else in his life would be subsidiary to this one driving pursuit.

What is the glory of God? The Bible speaks of it in two ways. First, there is His intrinsic glory, the revelation of all that God is. It is the sum total of all His divine perfections and holy attributes. There is nothing that man can do to add to His intrinsic glory. Second, there is God’s ascribed glory, which is the praise and honor due His name. This is the glory that man must give to God.

For Edwards, to be resolved to live for God’s glory means to exalt His most glorious name. It means to live 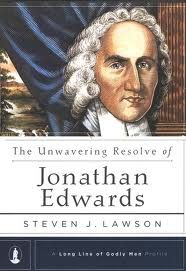 consistently with His holy character. It means to proclaim and promote His supreme greatness. This is the highest purpose for which God created us.

Why did Edwards place this resolution first? He understood that Scripture places the glory of God first in all things. Edwards was gripped with a transcendent, high view of God. As a result, in writing his “resolutions,” he knew he must live wholeheartedly for this awesome, sovereign God.

There it is! Everything in life fits under this master theme. Anything out of alignment with this principle pursuit is in dangerous territory. Sometimes our decisions are not between right and wrong. Sometimes they are between good, better, and best. These are sometimes the hardest decisions. Edwards said that he would not live for what is merely good. Nor for what is better. He purposed to live only for what is best. Whatever is most to the glory of God — that is what is best!

Edwards believed that God’s glory was inseparably connected with his “own good, profit, and pleasure.” Whenever he sought God’s glory, he was confident that it would inevitably yield God’s greatest good for his life. The glory of God produced his greatest “pleasure.” So it is with us. Would you know unspeakable joy? Abundant peace? True contentment? Then pursue God’s glory.

With unwavering determination, young Edwards chose this first resolution to mark “the whole of my duration.” As long as he was alive, this was to be the driving thrust of his life. He must always live for God’s glory. He would never outgrow this central theme. He must never exchange it for a lesser glory.

Also, Edwards’ believed that his commitment to God’s glory would bring the greatest “good of mankind.” By seeking God’s honor, the greatest advantage would accrue to others. Thus, living for the glory of God would lead to the greatest influence of the Gospel upon the world. Souls would be converted. Saints would be edified. Needs would be met.

Would you have maximum impact upon this world? Would you lead others to Christ? Would you live for eternity? There it is! Live for God’s glory.

No matter what, Edwards resolved to live for God’s glory despite “whatever difficulties I meet with, how ever so many and ever so great.” Regardless the cost, despite the pain, he would pursue God’s honor. Even if it meant persecution or poverty, his mind was made up, his will resolved. He would pay any price to uphold the glory of God, regardless of the hardship that awaited him.

Then make this first resolution of Jonathan Edwards your chief aim. Be resolved to live for God’s glory.

*Article originally appeared in Tabletalk Magazine, August 1, 2008. Dr. Steven J. Lawson is the senior pastor of Christ Fellowship Baptist Church in Mobile, Alabama. Dr. Lawson serves on the board of directors of The Master’s College and on the ministerial board for Reformed Theological Seminary, and teaches with Dr. John MacArthur at the Expositor’s Institute. In addition, Dr. Lawson has written numerous books, including Foundations of Grace and Famine in the Land: A Passionate Call for Expository Preaching, The Unwavering Resolve of Jonathan Edwards, and his recent offering The Gospel Focus of Charles Spurgeon.

Steven J. Lawson on Man vs. God on the Subject of Sin

Man calls it an accident;

God calls it an abomination;

Man calls it a blunder;

God calls it a blasphemy;

Man calls it a chance;

God calls it a choice;

Man calls it an error;

God calls it an enmity;

Man calls it a fascination;

God calls it a fatality;

Man calls it an infirmity;

God calls it an iniquity;

Man calls it a luxury;

Man calls it a liberty;

Man calls it a trifle;

Man calls it a mistake;

Steven J. Lawson is one of the best God-centered and Christo-centric expository preachers of our time. He is like a cross between John Piper, James Montgomery Boice and R.C. Sproul. Therefore, if any of those names mean anything to you – you will love this commentary by Lawson.

All the commentaries in the Holman series are concise, homiletical in orientation, and immensely practical for teachers and preachers of God’s Word.

Volume one contains an excellent and brief introduction to the Psalms with discussion and explanations of the unique features of the Psalms, including it’s title, authors, time period, literary types, book divisions, literary style, figures of speech, acrostics, and why and how they are so life-changing.

In volume one the first 75 Psalms are covered and in volume two he covers Psalms 76-150 and each are broken down in 75 individual chapters in the following manner:

1)    A title that summarizes the topic of the Psalm.

2)    A helpful quote that delineates the theme of the Psalm – usually from a great Christian from the past – Lawson is a very knowledgeable Church historian.

3)    A commentary on the chapter from the Bible which contains – the main idea of the passage and the supporting ideas written out in an expository outline with explanation, grammatical help, and exegetical insights.

4)    A main idea review and a conclusion for the chapter.

5)    A Conclusion – usually an excellent illustration of the passage.

6)    A Life Application – typically questions, commands, and principles to be applied from the passage.

7)    A prayer based on the passages truths and applications – all very God-focused and oriented toward praise.

9)    A teaching outline for the passage.

10) Lastly, issues for discussion taken from the passage.

I highly recommend this commentary on the Psalms – especially if you are only going to have one or two commentaries on the Psalms. Lawson is practical, theological, and does a superb job of getting to the heart of each passage without too much discussion of the details. I find that the devotional and practical nature of the commentary makes it very suitable for personal study, as well as the communal study of God’s Word.

How To Leave A Godly Legacy for Your Children Starting Today

During the Promise Keepers Movement in the 1990’s a swarm of books were published for men to be better husbands and fathers. I read a few of them – and most of them were very good, but this is the only book I’ve come to again and again – especially for help in raising my five children (and now – two grandchildren).

Lawson grabs the reader’s attention from the beginning with thinking about the importance of what we are leaving behind with our children with a gripping story of Max Jukes’ and Jonathan Edwards’ amazing legacy. Two men who lived in the same time period – one left a legacy of ruined lives; and the other a legacy of godliness that continues until this very day.

Steve Lawson is an excellent Bible teacher and preacher – and has made it a practice in his pastorates to train, equip, and spend time with men. As a father, pastor, and man’s man – he does an outstanding job of equipping men to be outstanding leaders – especially with their families.

In Part One he writes two chapters on demonstrating the fact that we all leave legacies – the only question is whether it will be a good one, or a poor one.

In Part Two there are 14 chapters on where to focus your time and teaching with your family. He shows how to build a legacy by growing, developing, modeling, and teaching in the following areas in order to leave a legacy for years to come in: godliness, love, obedience, respect, gentleness, maturity, discipline, wisdom, responsibility, strength, and prayer. The ultimate goal is to leave behind a godly legacy like Jonathan Edwards that continues on for generations. However, you can’t expect your children to be – what you are not. They will follow in your footsteps.

Lawson’s book is convicting, challenging, and very encouraging. He bases all his points on Scripture, hammers the principles on the anvil of real life experience, and gives many practical ways to start leaving behind a godly legacy today. If you are a dad – read this book and do what it says. You will be grateful to our Lord for Lawson’s advice – and so will your future generations!