[Adapted from the Excellent Book by Larry Burkett. Your Money After the BIG 5-0: Wealth for the Second Half of Life. Nashville: B&H Publishing Group, 2007, 215-219. 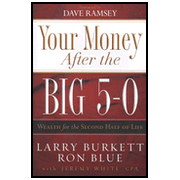 “Take Hold of the Life That Is Truly Life”

The hardest struggle of all is to be something different from what the average man is.

Money never made a man happy yet, nor will it. There is nothing in its nature to produce happiness. The more a man has, the more he wants. Instead of its filling a vacuum, it makes one. If it satisfies one want, it doubles and trebles that want another way. That was a true proverb of the wise man, rely upon it; “Better is little with the fear of the Lord, than great treasure, and trouble therewith.”

Why would you settle for such brief, short-term, inadequate, low-yield dividend pleasures offered by the world when eternal pleasures—tens of thousands of years of pleasures—await?

– HEARD FROM THE PULPIT OF AN ANONYMOUS PASTOR

“Do not store up for yourselves treasures on earth,

where moth and rust destroy,

and where thieves break in and steal.

But store up for yourselves treasures in heaven,

where neither moth nor rust destroys,

and where thieves do not break in or steal.”

The media refer to “the graying of America.” Sociologists analyze “the coming of age of the baby boomers.” The politically correct would say we are “chronologically challenged.” Really, we are just plain growing old. We are learning to be content with that. As someone recently reminded us in an e-mail, there are some good things about getting older. Your investment in health insurance is finally beginning to pay off. Your secrets are safe with your friends because they can’t remember them either. Your supply of brain cells is finally down to a manageable size. Your eyes won’t get much worse. People no longer view you as a hypochondriac. Things you buy now won’t wear out. There’s nothing left to learn the hard way. Your joints are more accurate than the National Weather Service. In a hostage situation you are likely to be released first. You are smarter, much smarter, at fifty-plus than when you were only twenty-five. Rather than approaching the second half of life with dread or fear, see it as a great adventure with the Lord. Think of the wisdom you have learned throughout your life—some earned by a degree from the School of Hard

Knocks and some earned by prudently following biblical counsel and teaching.

At every stage, the demographic phenomenon of the baby boomer generation has made a great impact on American society. With increased prosperity and longevity, will your wealth and life have a lasting impact on your family and the Kingdom? Avoid fitting in with what Ralph Waldo Emerson described when he said, “We are always getting ready to live but never living.”

Take hold of the life that is truly life—the abundant life available through a personal relationship with the Creator God and His Son, Jesus Christ.

As our friend Bob Buford said, “Do you want to get to the end of your life, stand before God, and hear Him say, ‘So what’? No, you want Him to tell you, ‘Well done.’”

We have purposed in this book to share all the financial wisdom we possess, all the wisdom we could borrow from others, and all the wisdom available in God’s Word. Our recommendations may vary from the world’s advice. We encourage you to keep working in some capacity during retirement, though the world says you are entitled to leisure. We recommend to pay off debt, though others give reasons to keep or increase debt. We recommend diversifying to preserve, though the secular instinct is to get rich quick. It is hard to go against the grain of a materialistic, status-seeking society.

There is Mr. Thing sitting down on a luxurious and very expensive thing, almost hidden by a large number of other things.

And there in the middle are Mr. and Mrs. Thing, smiling and pleased as punch with things, thinking of more things to add to things. Secure in their castle of things. Do they sound familiar?

The story of Mr. and Mrs. Thing always strikes a chord with the audience when shared in a public forum. Everyone, it seems, knows someone who fits their description. (And all of us probably see something of ourselves in this couple.)

Mr. and Mrs. Thing may be secure in their castle of things, but that’s not the end of their story.

Here it is: Well, I just want you to know that your things can’t last. They’re going to pass. There’s going to be an end to them.

Oh, maybe an error in judgment, maybe a temporary loss of concentration, Or maybe you’ll just pass them off to the secondhand thing dealer. Or maybe they’ll wind up a mass of mangled metal being towed off to the thing yard. And what about the things in your house? Well, it’s time for bed. Put out the cat, make sure you lock the door so some thing-taker doesn’t come and take your things. And that’s the way life goes, doesn’t it?

And someday, when you die, they only put one thing in the box. You.

About the Author: Larry Burkett (Pictured Above) was among the people who played a role in fulfilling President John F. Kennedy’s dream of landing on a man on the moon. After serving as an electronics technician in the Air Force’s Strategic Air Command, Burkett, who had degrees in marketing and finance, headed an experimental facility that served the Mercury, Gemini, and Apollo manned space programs.

After Larry and his wife, Judy, became Christians in the early 1970s, he began extensive studies of the Bible in which he found more than 700 direct and hundreds of indirect references to money. Just one year after becoming a Christian, he found himself living in Atlanta and working as a financial counselor with Campus Crusade for Christ. Concluding that most of the problems facing Larry’s counselees were the result of mismanaging funds, the Burketts began Christian Financial Concepts (CFC) in 1976. Their first office was in the basement of their home in Tucker, Georgia. In 1977, the first CFC newsletter was published. More than simply a collection of stories, the newsletter contained articles to help every family with their finances, including practical ideas for around the home, stewardship, personal testimonies, and biblical principles for managing money. In 2003, “Money Matters” now has a circulation of nearly 200,000.

Larry Burkett was also the author of over 50 books, including Debt-Free Living, Your Finances in Changing Times, and The Coming Economic Earthquake, and a guide for kids on money management, called What If I Owned Everything. Together with Ed Strauss, he wrote the World’s Easiest Pocket Guide series with books on everything from buying a first car, renting an apartment, getting a credit card, and more. Larry even branched out into the fiction arena with best-selling novels such as The Illuminati and Solar Flare.

In 1995, Larry was diagnosed with cancer which led to the publishing of several other books, including Nothing to Fear: The Key to Cancer Survival which Burkett used to share his own personal experiences and offer insight to his readers. One of the central principles Larry taught is that we don’t really own things; we are simply stewards and managers of what God has entrusted to us. In Larry’s case, that included the ministry he founded.

Until his death July 4, 2003, Larry and Judy Burkett resided in Gainesville, Georgia. He is survived by his wife Judy, four adult children, and nine grandchildren.